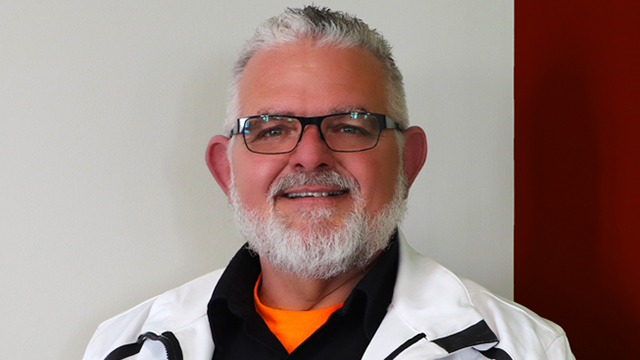 After 20 years with Neumann Brothers and 40 years in the construction industry, Superintendent Scott Parker hung up his hard hat. Scott officially retired February 28, 2019 to spend more time with family boating and working on Sprint cars. A party honoring his retirement will be held at the Neumann warehouse at 3:30 pm on Thursday, March 28, 2019.

“I’ve worked in construction basically all my life – I guess 40 years” said Scott. His dad was a brick layer and had his own business when Scott was young before eventually going to work for a larger company. “I saw him doing it my whole life and it’s just where I went. I stayed because I loved being a finish carpenter and building things with my hands.” For Scott, being able to go back years later and say “I built that” was a large motivator throughout his career. He started as a laborer before switching to the carpenters union. He moved up to carpenter foreman and eventually was promoted to superintendent. Scott became one of Neumann’s core superintendents and a leader for the next generation.

“There aren’t a lot of people like me left” he said. “A lot of schools don’t seem to offer the trade classes like they did when I was in school – it’s a lost art for a lot of trades, they can’t get enough new people in to replace the ones like me who are retiring.” Scott has helped by mentoring others in the field the way he was mentored when he was moving up through the ranks. “This job requires pride and a strong work ethic to bring things to reality” said Scott. “It’s nice to be able to show others the projects you were a part of and what you accomplished – that’s a good feeling!”

All of Scott’s favorite projects were completed in his 20 years with Neumann. His first physical job with Neumann was as a carpenter at the Capitol building. “It was honorable to work in that building because of what it is and what it stands for – I’m really proud of the work I did in the House and Senate chambers.” As an avid race fan and part of the TKS Motorsports Sprint Car team, Scott also loved working on the Iowa Speedway and running the Bryan Clauson Suite Tower project at the Knoxville Raceway.

While excited to be retired and actually take time for himself, Scott truly loved going to work every day. “I’m going to miss the comradery of the people I’ve worked with over the past 40 years.” For Scott, Neumann Brothers felt like one big family. “The people I’ve worked with made the job joyful – they have made me want to go to work every day” he said. “Some people hate their job and have a hard time getting up in the morning. Me? I loved my job and would find excuses to go to work.”

Bruz Linn, Curt Small, Jim Griffiths and Chad Bunner had some of the biggest impacts on Scott’s career. “Curt was the first superintendent I worked for at Neumann, he hung on to me and made sure I always had a job. And Chad, he saw potential in me and moved me up the ranks. I also got to work with him on several jobs – it was fun. I really enjoyed working with and for Griff and I have a lot of respect for Bruz and the way he treated people in the field and the way he ran things.”

Scott plans to move to the Lake of Ozarks (to get away from the snow) where he already has a boat docked. He also intends to keep working on race cars, which is no surprise to anyone who knows him. What he’s most looking forward to though is spending more time with his dad. “He’s getting older and he likes to golf during the day – I rarely got to do that while I was working so I want to go golf with him more.”

Everyone who has had the pleasure of working with him, miss him greatly already. But we wish him all the best and hope he enjoys his retirement. Congratulations, Scott!