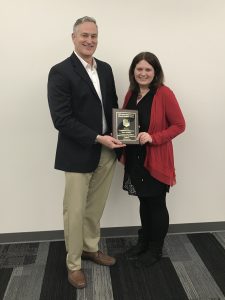 DesignBuild Solutions* (DBS) was selected as a recipient of the Masonry Institute of Iowa (MII) Appreciation Award for the Musco Corporate Headquarters addition project. The project is one of nine projects from around the state of Iowa to be chosen for the yearly award.

The Musco Corporate Headquarters addition project in Oskaloosa, Iowa was nominated by Glen-Gery Brick, a member of the MII and the brick supplier for this project. Architect Matt Keller (AIA) was presented the award at the Masonry Institute of Iowa’s annual meeting Tuesday, March 12th at the Laborers 177 Building in Des Moines.

“This was purely a team effort” said Matt, “the Owner [Musco Sports Lighting LLC] had a great concept and vision for this addition, our team worked out the details and Neumann Brothers and their masonry subcontractor Forrest and Associate performed admirably.”

The challenging project connected four buildings with a two-story building addition. Parts of the addition were built over two separate buildings. Early on, DBS was tasked with converting the Owner’s façade concept into a set of drawings that adhered to the rules of masonry layout while also creating a façade that provided a cornice detail to complement the architectural fabric of the downtown Oskaloosa historic district.

The team chose tumbled closure and modular brick that tied into the Owner’s concept of an early 20th century building. Brick, dentils, cast stone sills and accent bands, as well as brick herring bone accents helped give the front façade of the addition an authentic, old-fashioned appeal. “The vernacular, hard scrabble look of the brick is not typical of today’s modern buildings which really gave the façade character and helped in keeping with its surroundings – an old Midwestern town square” said Matt.

Congratulations to DesignBuild Solutions and the Musco Corporate Headquarters team on this award!