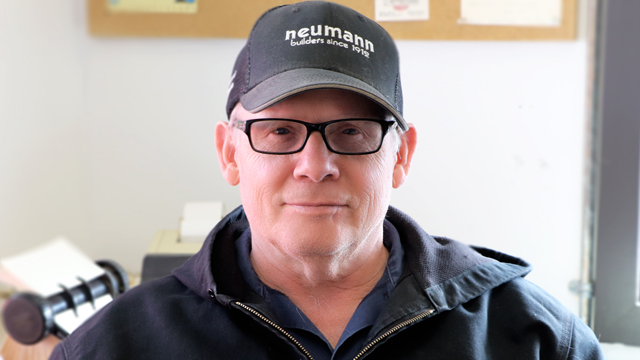 On March 29th, Warehouse Manager Marc Barnes officially retired from Neumann Brothers after 26 years. Hired directly after the floods of 1993, Marc worked to establish new warehouse operational procedures to streamline the deployment and redeployment of materials, tools and equipment from the Neumann warehouse to various jobsites. In his early years, he planned and executed an internal reorganization of the warehouse layout and the yard that included enlarging the south end of the property for job trailer storage that is still largely in place today.

While working full-time for Neumann Brothers, Marc continued to serve in the Iowa Army National Guard. He retired from the Guard in 2011 with 38 years of military service. It was while serving as TAC Officer at the Iowa Military Academy that Marc was recommended to Bruz (Marshall Linn) to fill Neumann’s warehouse manager position.  “I think I had 5 separate interviews before I actually got the job” laughed Marc. “But Bruz brought me in, gave me the authority to make decisions on behalf of the warehouse and was very good about providing support to me in this role.” Bruz also supported Marc’s military career which allowed him to carry out his responsibilities to both Neumann and the Guard.

While Bruz helped him get in the door, it was former Superintendent George Ivanovich that impressed him and helped him find his place in the construction industry. “I was the outsider coming into the industry and I’ve heard several times over the years that George encouraged others to give me a chance” said Marc. “I recognize and respect George’s actions even now as an example of his unique leadership ability.”

The warehouse position was a good fit from day one. “I’ve spent most of my adult life working in operational positions” he said. Between his time in the army, time in hotel operations and then his 26 years with Neumann, he definitely found his place. As the warehouse manager, it was his job to ensure that materials and working equipment were provided to field crews in a timely manner. He has worked to streamline each process to the best of his ability. “It’s been my job to take care of the field and I wanted to make sure they’d get the right equipment, quickly.” What made him successful in his role was his ability to prioritize the work based on what was best for the business and never playing favorites with any individual field personnel. “I really wanted to get that right and be fair to everyone.”

Neumann has grown quite a bit during Marc’s time. “I used to go to staff meetings and there were only 8-10 people in them, now there are 30 or more – there has been a lot of growth in the company.” He says that’s a good sign and that it bodes well for Neumann’s future. “Everyone here is highly motivated to do good work and people here don’t leave – that’s a major positive!” He also reflected on the changes he’s seen over the last 26 years. “When I think back to where Neumann was after the flood, especially from an operational stand point, everything has improved – just the way a successful company should.”

He’s leaving new warehouse manager, Benton McClaran in charge and he knows that things will only continue to improve. “They are already working to implement a new tool tracking process which will really help the way they keep track of where equipment is.” He hopes that much like he received early on, people now will show Benton the same support and that Benton will take their support and advice. “There are people who have been here for a long time, I hope they continue to share their knowledge and experience with each other – Neumann is a team and that’s why Neumann works so well.” 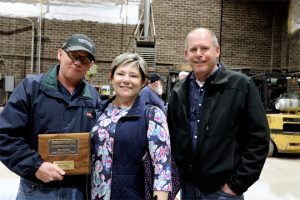 Marc definitely won’t be bored in retirement. He plans to establish a stock and futures trading company and spend a good amount of time traveling, scuba diving, downhill skiing and golfing. Marc, his brother and his nephews plan to spend a lot of time scuba diving on the island of Bonaire and on scuba diving “live aboards” in locations like the Red Sea. He also intends to get in some skiing in the European Alps when he visits his brother who lives in Stuttgart, Germany.

“Neumann is a good company with good people and it’s been a privilege to work here but the adventure continues!” Join us in congratulating Marc on his retirement! We wish him well in his new adventures.