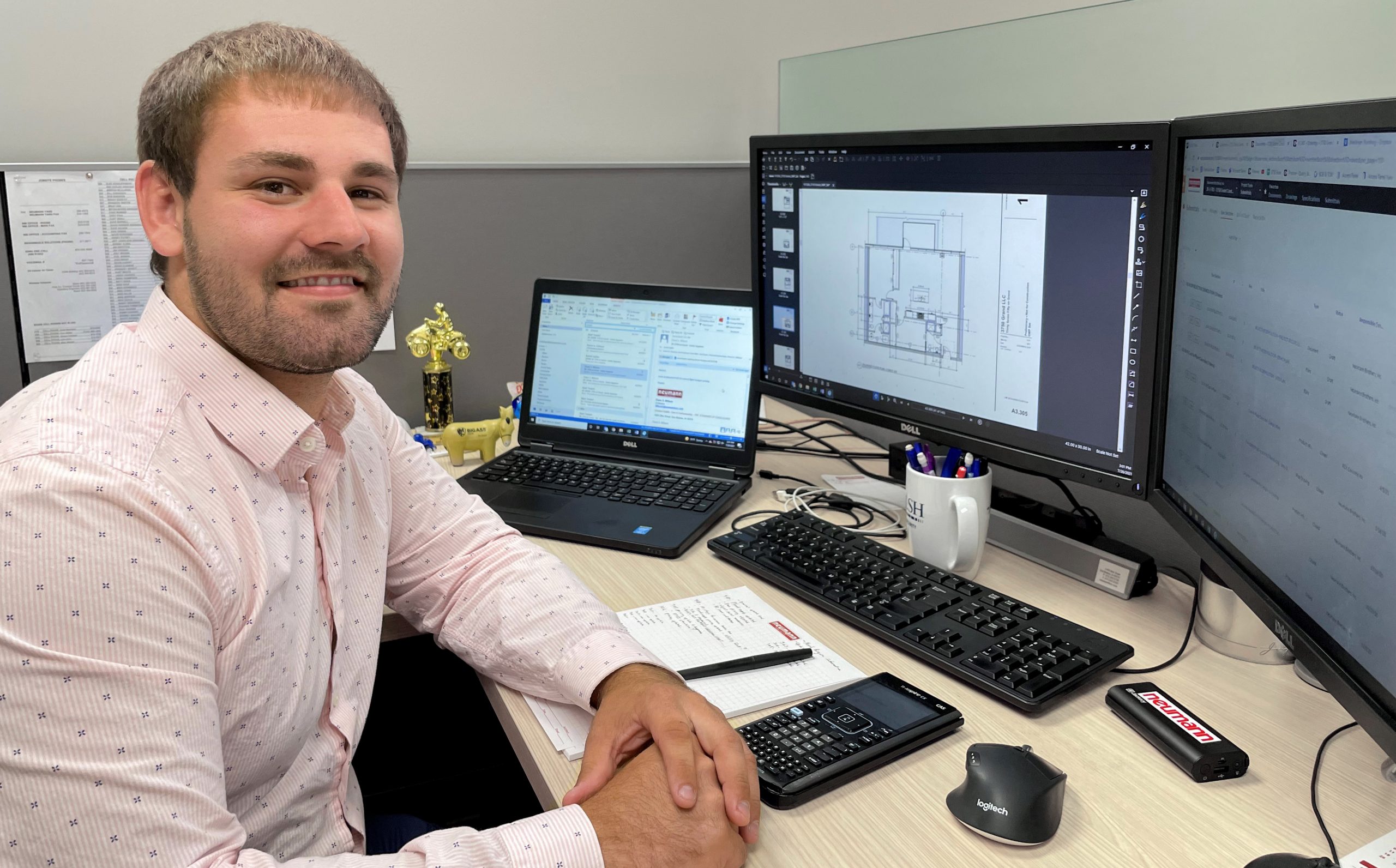 Neumann Brothers is pleased to re-introduce Pierce Gelhaus! Pierce has been with Neumann for over three years as an engineering intern, field intern, and completed his Neumann co-op experience in 2018. After his college graduation in May of 2021, he joined our team as a full-time Project Engineer.

Pierce first became interested in construction in high school. He transformed an old chicken coop on his parent’s acreage into a mancave for him and his friends to hang out. Pierce reused old barn wood, insulated the building, installed electrical, laid carpet, and outfitted the mancave with a television, couches, and a pool table! “That was my first taste of construction,” he shares, “I was 16 years old.” A few years later, the mancave burned down, but that didn’t discourage Pierce. “I rebuilt the entire thing–and made it bigger and better!”

Pierce continued to be involved in construction throughout high school, working for contractors to pour concrete, frame buildings, shingle roofs, and remodel residential spaces. “I enjoyed the work probably more than most people would,” he says. “I found myself learning more and more about the different fields of construction and didn’t want to stop.”

Pierce attended Iowa State University and graduated with his Bachelor of Science in Construction Engineering degree in 2021. During college, he completed two summer internships and one co-op with Neumann. “My internships with Neumann gave me the complete experience of what my career in construction could look like,” Pierce shares. “With every phase, from bidding to closeout, I learned what needs to be done to complete a project. Working in both the office and the field helped you understand everything it takes for a team to complete a project.” He also worked closely with Mark Thompson, Project Manager, during his internships and co-op. “Mark has an impressive level of experience that was extremely beneficial to learn from.”

When Pierce graduated college, he knew he wanted to continue working for Neumann. “They treated me like a full-time member of the team,” Pierce says. “They didn’t assign menial ‘intern’ tasks. They allowed me to grow by taking on responsibilities and working the entire project with the team.” He also had the desire to stay local because he enjoyed living and working in central Iowa. When asked what he likes most about working at Neumann, Pierce reflects, “Watching the building develop over time and solving problems along the way. And knowing that you’re part of a team that’s working together to build something.”

Outside of his career in the construction industry, Pierce enjoys staying active and being outdoors with his friends and family. He enjoys playing in a summer sand volleyball league with his girlfriend and boating at Okoboji and Saylorville Lake.

Pierce has been a valuable member of our Neumann team, and we are proud he’s continuing his career with us. We are looking forward to watching him advance and leave behind a legacy of success!