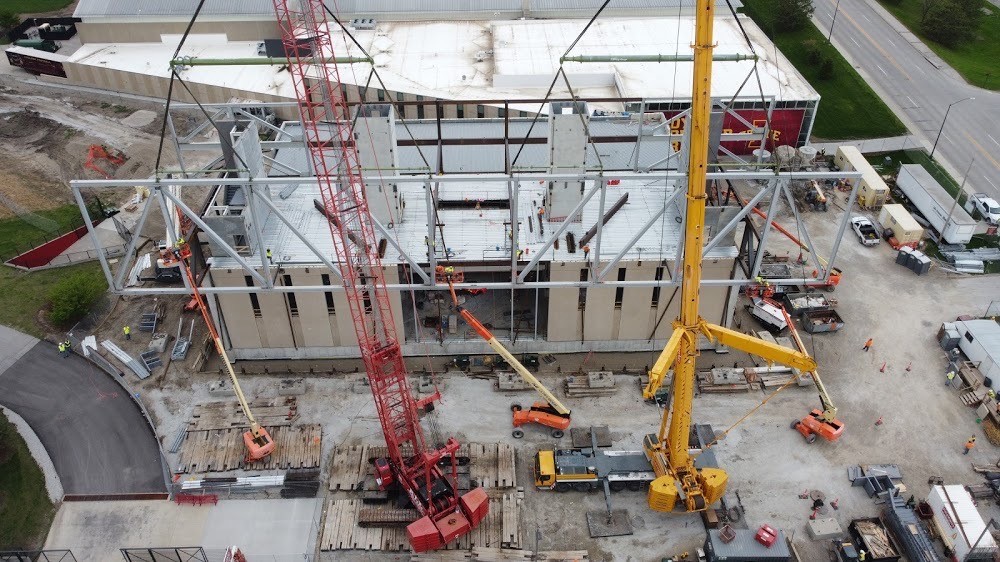 This project needed to lift a 38′ tall, 220′ long truss that weighed 92 tons. That’s about as long as the wingspan of a Boeing 747 and weighs around 16 elephants. It was a very large lift that required two cranes to get the job done. The two cranes were rated at 300 tons and 500 tons, respectively and after the calculations were run each crane was calculated at almost 70% capacity.

OSHA defines a critical lift as any lift that (1) exceeds 75% of a crane’s rated capacity; (2) utilizes more than one crane; or (3) is lifting personnel.

Northwest Steel Erection (NSE) created the critical lift plan and provided a step by step process for the ISU lift. The 23-page plan included a description of the lifting procedure; a temporary bracing plan as the truss was being built on the ground; a site conditions plan including crane placement and swing radius; detailed calculations tied to each crane’s lifting capacities charts; and specific rigging components. The rigging plan added an additional 19 tons of weight to the pick! That’s an extra 3 elephants for a total lift weighing almost as much as 20 elephants.

We’re proud to say that lift day went off without a hitch and the plan was executed perfectly!

Thanks to all the workers from NSE and to all our Neumann Brothers employees who spent many hours planning and executing this critical lift.