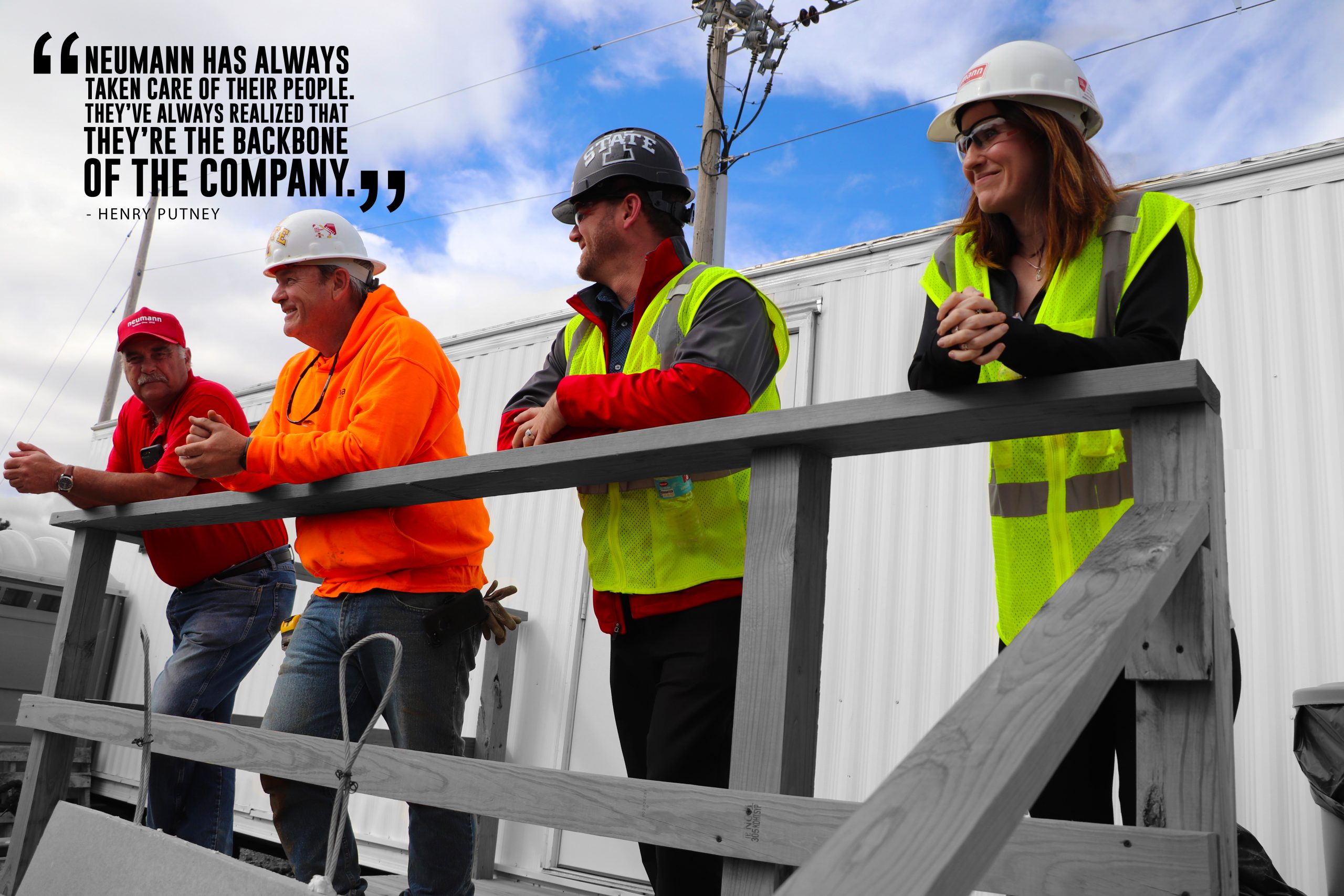 After 44 years with Neumann Brothers, and 50 years in the construction industry, one of our most valued Superintendents, Henry Putney, retires.

Henry, an Army Veteran, joined the military in 1972 and spent two years in Germany. Then returned home two years later and began looking for his next job. Henry had experience building houses and apartment buildings, but the housing market had gone south during his time overseas. When he discovered Neumann Brothers, it was the perfect fit.

Henry began working as a Carpenter in 1976 for Neumann Brothers. As he recalls his first Neumann job—building an autobody shop for Des Moines’ Lincoln High School—he laughs. “That was a long time ago!”  Henry dedicated himself to his craft, working his way up from a Carpenter to Carpenter Foreman, to Superintendent in 1983.

Henry’s favorite project during his time at Neumann is the Iowa Judicial Branch Building on the state Capitol Complex, home to the Iowa Supreme Court. “The building was designed to look like it had been standing there for 100 years. It was very cool and I was Superintendent.”

The construction industry isn’t just about building projects—it’s equally about the relationships that are built. Henry reflects on the importance of mentorship and how it affected him. “George Ivanovich, had a significant impact on my career at Neumann. I worked with him when I was a Carpenter and Carpenter Foreman. He taught me how to manage projects, oversee job sites, and work with the entire team of subcontractors and personnel. That’s a big part of how to be successful in this role.” Together, they worked on multiple projects, including Banker’s Life, Two Ruan Center, and the first three floors of the Wells Fargo building in downtown Des Moines.

Most recently, Henry mentored Kevin Cherry, who recently was promoted to Superintendent. “I mentored him the same way George did for me. I taught him how to manage the project, lead the subcontractors and team, and keep working moving for everyone.” Henry mentions he will greatly miss his time with Kevin.

Henry also met his wife, Shelly, working at Neumann Brothers. In 1994, they were both working on the Federal Court House in Des Moines, where they met. Shelly was the Project Accountant and Henry was the Superintendent. One year later, they were married.

The family affair continued when Henry’s son-in-law, Jeremy, joined the Neumann team as a Carpenter’s apprentice. Jeremy is now an Assistant Project Manager and Henry speaks very highly of him. “Working with Jeremy, well, he is a good kid, real good kid. Intelligent.”

To know Henry is to love his stories. “I mean, I’ve got a lot of great stories. I could write a whole book! I probably won’t, but I have so many memories.” When asked what Henry will miss most about working at Neumann, he reflects fondly: “I will miss the relationships and spending time with the team every day… that will be the hardest part.”

So what is Henry looking forward to doing next? “Right now, nothing. I’m ready to kick back for a while and relax. Although, I’m sure something will come up. I love to hunt and fish, so I’ll do plenty of that. Some woodworking in my woodshop. And travel—one place I really want to go to Africa to safari and hunt.”

As Henry prepares to spend time with his family and enjoying his favorite hobbies, Neumann Brothers thanks him for the years of dedication and leadership he brought to the team. Henry is truly a special individual and has played a significant role in the construction community for the past five decades.

When sharing stories about Henry and his legacy, his son-in-law Jeremy said something profound: “When we’re driving with our kids—Henry’s grandchildren—we point and say, ‘Look at all those buildings! Grandpa touched the entire Des Moines skyline.’” We couldn’t have said it better ourselves. Henry Putney’s contributions to the construction industry and the State of Iowa are memorialized in the buildings and communities he helped create.