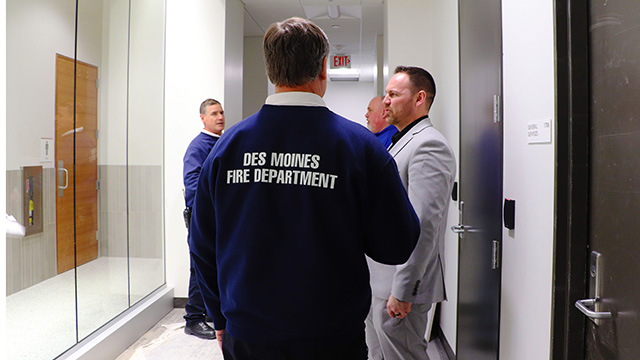 Project Manager Matt Davis walks through the project with members of the Des Moines Fire Department. 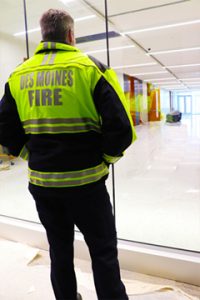 During the closeout portion of a project, system tests are conducted to make sure we’re turning over a working product to our clients. At the Polk County Criminal Courts project, one test that had to be completed was a test of the smoke evacuation system. This test was conducted with the Des Moines Fire Department and checks to see if the smoke dampers – the interior to exterior ventilation – will open if/when a fire is detected. This system will also shut fire rated doors on each level to contain the smoke so that it doesn’t spread through the building and opens the entry doors and roof fans in order to get smoke out of the building and fresh air in.

This process is necessary as flames and heat are not directly 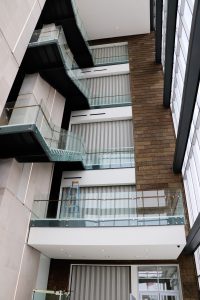 responsible for most deaths (in cases of fire). Usually, smoke inhalation causes death long before fire reaches a victim. This system was put in place to allow people more time to get out of the building before smoke becomes a problem. The system also alerts the DMFD so they can be on the way before anyone has to call in.

There are a few ways to test these systems. The first, is to set off smoke bombs in the building and allow the smoke to trigger the system, simulating a fire or smoke situation in a controlled manner. The other way, and the way it was done for this project, is to alert the system manually and see if everything works as it was designed. Either way, triggering the system then opened all of the smoke dampers and the two sets of entry doors while closing the fire rated doors on each floor. Once the fire department confirmed everything worked as planned and they had received the alert, the system was given a pass.

Final details and tests just like this are crucial to completing any project and are essential to turning over a project to the owners.